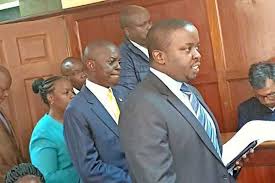 The couple also pleaded with the court to set aside a magistrate's orders detaining their passports.

Through lawyer Steve Kimathi, they applied for bond terms similar to those of their co-accused persons.

Kimathi said there is no cogent data and compelling reason to detain the two's passports.

He said the two were never a flight risk because they presented themselves in court after seeing on social media that a warrant of arrest was out for them.