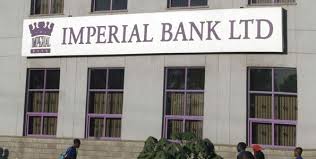 NAIROBI, March 23 (Reuters) - A Kenyan court charged two former executives of collapsed Imperial Bank with involvement in a conspiracy to defraud the bank and depositors of 29 billion shillings ($286 million), a court filing showed on Wednesday.

Three other individuals and a company were also charged with involvement in the alleged scheme, the charge sheet showed.

All those charged pleaded not guilty, Steve Kimathi, a lawyer representing the three individuals but not the two former executives, told Reuters after attending the court session.

The Central Bank of Kenya (CBK) ordered the privately owned bank to be put into receivership in October after the board of the mid-sized lender alerted it to alleged malpractices.

Naeem Ahmed Shah, who was head of credit, and James Jamlick Kaburu, who was head of finance, were charged with seeking to defraud the bank and depositors through “an irregular and illegal overdraft disbursement scheme”, the charge sheet said.

The individuals and company could not immediately...